Hello! Thanks for passing by! I talk about subjects like space, games, RPG's, anime, triops and Mexico!

Please take some time to check the banners on the right to help those in need and Follow me in Google .

Donate to the Girl Effect Fund! 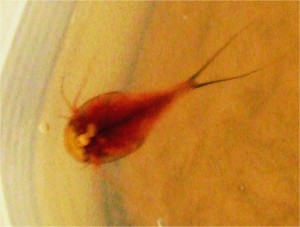 This will be like the 4th time I try to hatch triops. The first and second time were successful, but the third batch was struck with a cold wave and I didn’t have a desk lamp handy. We are not supposed to have 10°C on Cancún! >:(  -stupid climate change-

Triops 1 was put on a Aquasaurius tank and lived fro almost 2 full months, a feat on the realm of triops or so I heard! He had just a small amount of small white gravel and I’m not THAT sure he laid eggs (yes, I called him HE… as triops can be hermaphrodites).  He would spent his time doing “aquabatics” and swiming upside down along the surface.

Triops 2 (on the pic above) didn’t have the same luck and lived barely to be a little more than a month old. I gave Triops 2 some fine sand to lay eggs and he seemed to like it and spent more time in the bottom, although its water turned murky very easily. :S

Right now I have a small plastic container with 4 hatchlings and I hope to make a small experiment. I’ll put one on the Aquasaurus tank but this time with black gravel and the others will be on a big plastic container without substrate again. I was told the black gravel could have some  chemical substance that could harm the triops so I don’t want to take that chance with the whole lot.